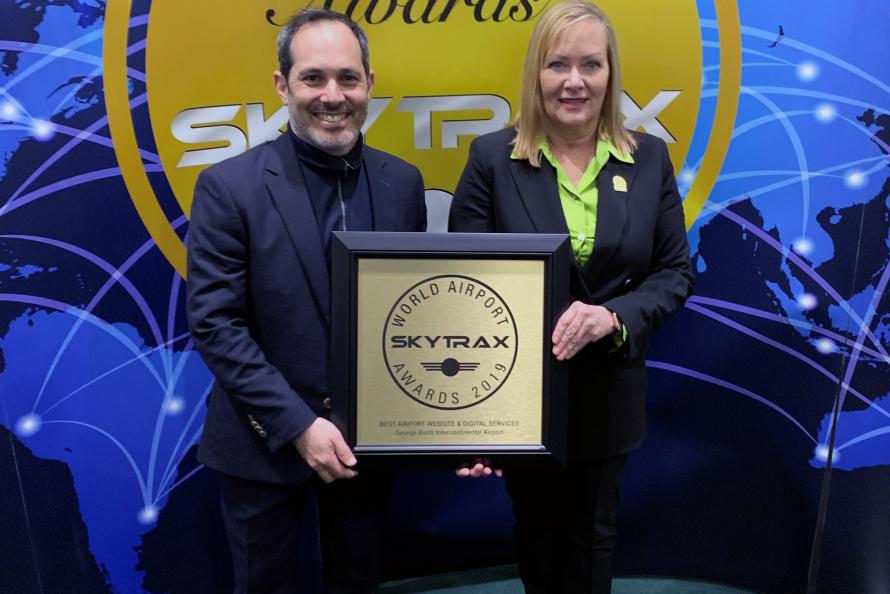 HOUSTON — Once again, Houston’s airports can boast two 4-star rated facilities, and now boasts the most “plugged in” airport in the world after the 2019 World Airport Awards results were announced by Skytrax today in London, England.

‘’The Skytrax 4-star awards for service and facilities are awarded based on detailed analysis of airports’ service profiles,” Mayor Sylvester Turner said. “Our two 4-star ratings for a second year in a row confirm that our airport system is one that Houstonians, passengers from around the world and the airlines can all be proud of. Top-rated airports firm up my agenda for the continued economic growth of our city.”

Also, Skytrax announced that the Houston Airport System received the inaugural “Best Airport Website and Digital Services” award as part of the Passenger’s Choice Awards. Based on the results of 34 million passenger surveys, Bush Airport was recognized for providing the best digital experience in the world to its passengers.

“We understand that, for today’s savvy traveler, technology is not an option — it is a must,” said Houston Aviation Director Mario Diaz. “In our continued commitment to provide a 5-star experience and 5-star facility to our customers, the kind of cutting-edge technology the Houston Airport System is pioneering will not merely meet those needs, it exceeds them, and elevates our airports’ performance and standards. We are proud to boast two 4-star airports, and proud of receiving this inaugural award in recognizing these efforts. But, we know this is merely another step forward in achieving our ultimate goal, and we remain committed to getting to that 5-star level.”

Digital connections are vital to today’s tech-savvy travelers, and the commitment to cutting-edge technology by the Houston Airport System earned Bush Airport the inaugural award. Since its relaunch in May 2016, the mobile-friendly and award-winning fly2houston.com website serves approximately 10 million users annually, and is available in English, Spanish and, most recently, Chinese. It hosts the first browser-based interactive airport maps, thanks to LocusMaps Online software that provides digital wayfinding and serves 1.5 million users per year. In the airport itself, upgraded interactive visitor kiosks feature state-of-the-art software and 3D wayfinding maps that help not only navigate through the airports but also provide a plethora of useful information. Users  can find directions to their boarding gates by entering their flight information or scanning their boarding pass in an updated search function. The kiosks take that information and display a 3D map that will show the quickest and most efficient route to the departing gate.

And, to keep those directions handy, travelers can choose to have a map of their route sent directly to their smartphone in a text message. As well, the enhanced search capabilities provide not only user-friendly directions and maps, but also pertinent information for the traveler, like weather updates, airport shopping and dining options, and a variety of services available, like locations for ATMs, water bottle filling stations, shoeshine stands, currency exchanges and clubrooms. The kiosks in the baggage claim area include information on nearby hotels as well as ground transportation.

The new software is fast. Using the kiosk, the time it takes to find a destination with the mapping tool has improved by almost three minutes — travelers thus far have been able to find their desired destination in less than a minute.

In the audit report for Bush Airport, Skytrax noted not only the strong website service, but also the wait time digital displays in the terminals and the public art and Harmony in the Air performing art programs. The report said: “The airport continues to deliver a 4-star customer experience and change enacted since the last audit has strengthened the passenger experience in many areas.” Bush Airport first earned a 4-star rating from Skytrax last year, and this year the facility and services earned more than 550 scores of 4.5 or higher on the detailed checklist. Among the highlights in ratings are:

As well, Bush Airport ranked No. 5 in the world for Best Dining Experience.

In the audit report for Hobby Airport, Skytrax noted improvements to the TSA operations, including the reorganized queues and improved signage for fast-track queues. It also cited the public and performing arts programs and a new “selfie wall” that offered positive customer engagement. The report said: “The airport is presently delivering a 4-star customer experience and subject to changes outlined during the audit there is reasonable expectation that the airport could achieve 5-Star Regional status.” The facility and services earned more than 250 scores of 4.5 or higher on its detailed checklist. Among the highlights in the ratings are:

The World Airport Ratings are the international airport quality rating program operated by Skytrax. Ratings are determined through direct and professional analysis of industry quality standards. The airport star ratings are recognized as a global benchmark of airport standards. The Skytrax World Airport Awards — a global benchmark of airport excellence — are among the most prestigious accolades for the airport industry. The results of the survey were announced at the 2019 Skytrax World Airport Awards at Passenger Terminal EXPO in London on March 27, 2019.