The Houston Airport System provides a safe and dynamic air services network that fosters economic vitality for the transportation industry and facilitates a strong level of global connectivity for diverse and growing population living throughout the greater Houston region.

Our Airports Our History Our Impact Human Trafficking Awareness

Our Airports
Our Airports Our History Our Impact Human Trafficking Awareness

The three-airport system served nearly 60 million passengers in 2019. Together, Houston Airports form one of North America's largest public airport systems and position Houston as the international passenger and cargo gateway to the south central United States and a primary gateway to Latin America.

We exist to connect the people, businesses, cultures and economies of the world to Houston.

Establish the Houston Airport System as a five-star global air service gateway where the magic of flight is celebrated.

1910- Frenchman Louis Paulhan flew the first airplane in Houston, a Farm biplane. About 2,500 people paid $1 to see him fly.

1928 - The City of Houston opened a Municipal Terminal and hangar at Carter Field.

1937 - W.T. Carter Field was brought by the City of Houston with a bond issue of $500,000 and $150,000 in cash. The airport, renamed Houston Municipal Airport became Houston’s first public airport.

1946 - An international wing is added to the airport.

1950 - Houston Municipal Airport’s airline traffic continues to grow at such a rate that it is running out of available facilities.

1954 - The new Houston International Airport terminal is inaugurated in a big two-day celebration with General Ira Eaker as the keynote speaker.

1965 -  Houston International Airport introduces a monorail service to ferry passengers to and from the parking lot to the terminal. It is built by the same company that built Disneyland’s, and is the only other public monorail.

1969 - Houston Intercontinental Airport opened and all scheduled passenger flights are moved from Hobby Airport to the new airport. The airport consisted of two terminals, A and B.

1971 - Passenger service is restored to Hobby airport when Southwest airlines moves its operations back from Intercontinental Airport. This begins a tradition of service to smaller and older airports that are closer to city centers.

1981 - Terminal C opened. A parking garage begins to be constructed at hobby airport as airport traffic continues to grow. The parking garage will allow more passengers to fly in and out of the airport.

1988 -  A preservation program is set up by the City of Houston to stop the further deterioration of the 1940 air terminal. The Houston aeronautical Heritage Society forms to restore and save the historical terminal. The north wing of the museum was opened to the public in 2004.

1990 - The international arrivals Terminal D was named after Mickey Leeland. The longtime Houston Democrat died in an Aug. 7, 1989 plane crash while aiding famine victims in Africa.

2020 - Houston remained the only city in the Western Hemisphere with two Skytrax four-star rated airports.

2020 - Houston became the only U.S. city to have two airports equipped with biometric boarding and arrivals for international passengers. 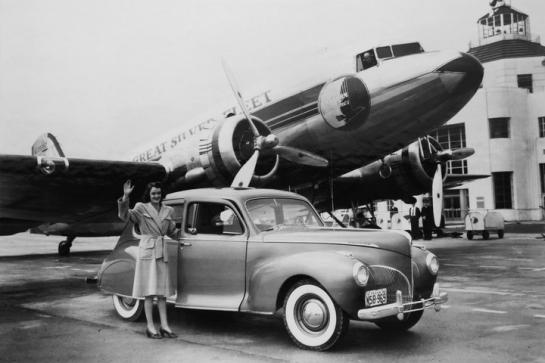 The airfields found at the three airport facilities are capable of accommodating virtually any type of aircraft, even those as large as the Antonov 225, on runways that extend up to 12,000 feet.

While the airports represent a significant contribution to Houston and the surrounding communities' economies, the airport system functions as an enterprise fund and does not burden the local tax base to pay for operations, maintenance or capital improvements.  The Houston Airport System accomplishes financial self-sufficiency by deriving income from fees, rentals, and other charges. Surpluses generated are reinvested into capital development and bond retirement. According to the most recent economic impact study, the three airports collectively contributed more than $36.4 billion (2019) to the local economy and were directly responsible for more than 190,000 jobs.

Houston Airports affirms its commitment to using its best efforts to assist in the fight against human trafficking, in accordance with the City of Houston’s zero tolerance policy.  We stand in support of the victims of human trafficking, and we assist in the detection and reporting of all suspected human trafficking activities at our airports.  We do this through promoting awareness and through coordination with our stakeholders and local and federal authorities.