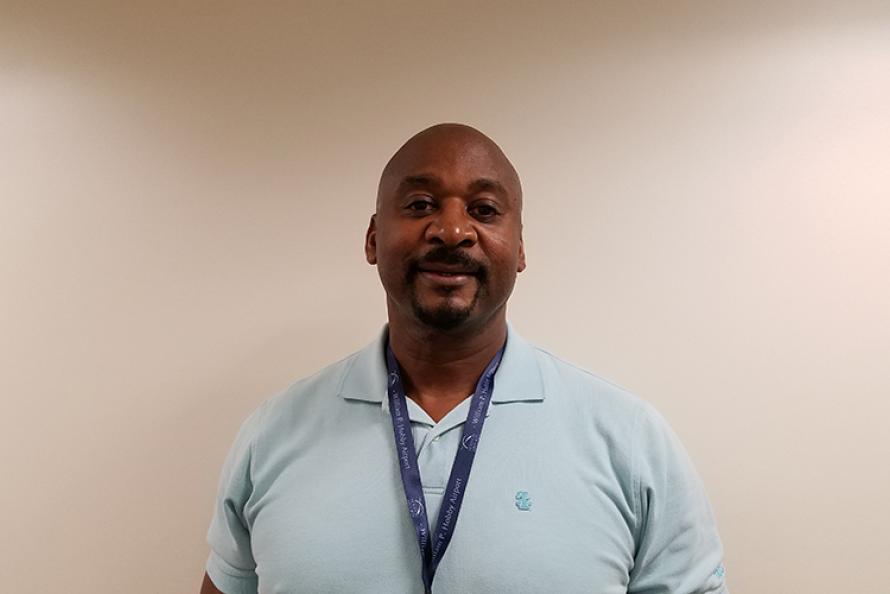 Tony Bolar leads training for the City of Houston and also volunteers at Hobby Airport.

Tony Bolar works for the City of Houston’s Human Resources Department as the Administration Manager for the Learning and Development Center. His team conducts training for a variety of subjects for City of Houston employees.

A student in one of the training classes gave Bolar a surprising invitation.  William P. Hobby Airport’s Customer Service Coordinator Cheryl Barber is a constant cheerleader for the airports and is always looking for friendly faces to add to the Houston Airports Ambassadors program. During the class, she invited all of the attendees to apply to become a volunteer at the airports.

“Cheryl explained the benefits and the time commitment, about 16 hours a month, and I thought this is something I think I would enjoy,” Bolar said. Bolar works full time for the City of Houston, and now one day a week he spends four hours helping passengers at Hobby Airport.

“It’s a great opportunity for me, because I like to help people, and I am able to represent the City of Houston by leaving visitors with a friendly first impression,” Bolar said. “Also, the commitment is not very time consuming, and I am able to easily juggle family, work and community.”

Recently while volunteering, Bolar began to notice an elderly man who appeared flustered near baggage claim. The man walked away and then Bolar noticed an elderly woman pacing around with a look of concern. She eventually walked away but then the man returned. Bolar approached the man to ask if there was anything he could do to help. The man explained that he was looking for his wife, and she was supposed to be at baggage claim but was not there. Bolar asked the man to stay put while he tracked down the wife. Bolar was able to unite the couple. They thanked him and explained they were not accustomed to an airport environment and rarely ventured far from their Clear Lake neighborhood.

Whether it’s pointing someone to the nearest restroom or going the extra mile to put a smile on a passenger’s face, Bolar is glad he followed up on Barber’s offer to apply to the Airport Ambassador program.