Houston Airports is committed to mitigating, wherever possible, noise exposure resulting from aircraft operations at any one of its three airports: George Bush Intercontinental (IAH), William P. Hobby (HOU) and Ellington Field (EFD).  We employ noise management personnel who continuously address community noise issues through real-time flight tracking, as well as public involvement and outreach. The airport noise staff is  dedicated to providing technical information regarding aircraft operations and noise exposure to concerned citizens, and to communicating effectively with the public to enhance collaborative relationships and be a good neighbor to the surrounding communities.

The links provided below are the first step in understanding “how” and “why” aircraft operate in and out of IAH, HOU and EFD. Also provided are contact numbers and email addresses for the Noise Compliance staff. If your questions cannot be answered by the information contained on this website, please contact the Noise Compliance Office of the Houston Airport System directly.
Noise Compliance Hotline 1-281-233-3900

Federal Aviation Administration (FAA)
The FAA has primary responsibility for the movement of aircraft both within the airport movement area (taxiways, runways) and in the air. Air transportation affects interstate commerce; therefore, it falls under the regulatory responsibility of the federal government. The FAA designs standard air traffic procedures based on various safety, capacity, and traffic flow management considerations. Safety remains the first priority of Air Traffic Control (ATC).

Houston Airport System
Houston Airports serves as the landlord of its airports, holding leases with airlines, concessionaires and airport-related businesses. While airport managers and staff regulate activities such as engine maintenance run-ups, they do not have authority to alter flight tracks and airspace procedures. Houston Airports can advocate noise mitigation practices and operational procedures to contain noise exposure, but actions of the sort require approval and implementation by the FAA.

Airlines
Airlines are users of the airport and airspace system. They determine their own schedule, frequency of operation, which markets to serve, what fares to charge and types of equipment to operate. They do so in compliance with federal aircraft certification and operating requirements. In addition to active Federal Aviation Regulations, airlines also set their own standard operating procedures based on best business and operating practices.

Pilots
Pilots have the ultimate responsibility for the safe operation of the aircraft. Although each airline can adopt voluntary mitigation procedures and recommended best practices, pilots still retain the operational authority and discretion to make final decisions regarding the safe operation of the aircraft. Pilots are expected and encouraged to adhere to special operational procedures during departure and arrival. However, in the interest of safety, pilots may deviate from such procedures when necessary.

If you have questions about a particular flight pattern over your home, please contact the Noise Compliance Office at 1-281-233-3900.

In the west-flow configuration, aircraft arrive on runways 26R, 26L and 27 and depart from runways 15L and 15R. Runways 33L & 33R can also be used in this configuration. Runways 26R, 26L and 27 can also be used for departures when possible. The following graphic shows typical departure and arrival flight corridors for west-flow operations. Departures are shown in blue and arrivals are shown in red. 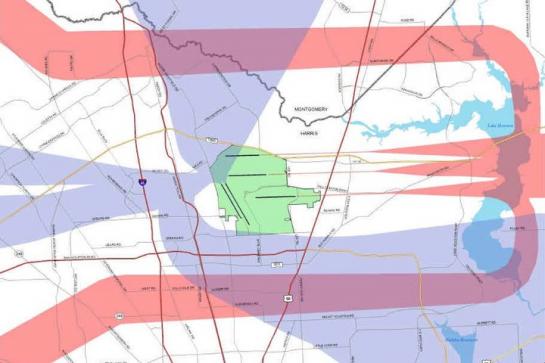 In the east-flow configuration, aircraft arrive on runways 08R, 08L and 09 and depart from runways 15L and 15R. When able, the FAA will also use runway 09 for departures. As in the west-flow operation, these runways can also be used for departures in this configuration. The following figure shows departure and arrival flight corridors for east-flow operations. Departures are shown in blue and arrivals are shown in red. 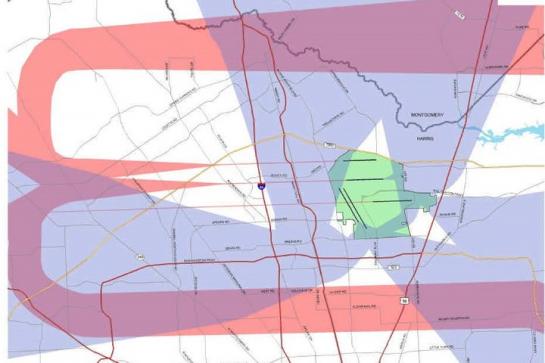 What happens when I report aircraft noise?

The Noise Compliance Office will log your report in a database. Each report is investigated and a follow-up response is provided when requested. Should it be determined that an aircraft in question was not following an established Federal Aviation Administration (FAA) procedure, the FAA and/or the airline will be notified in order to take corrective measures.

Why do planes fly over my house?

Depending on where you live, aircraft may be flying overhead as a result of standard airspace control procedures. However, day-to-day airfield maintenance or weather conditions may change traffic flow patterns.

For safety reasons airplanes land and  take off into the wind and must follow standard instrument procedures and/or Air Traffic Control (ATC) vectoring and sequencing instructions. Arriving aircraft will typically line up with the runway many miles away, then make their final decent approach to the runway via a three degree glide slope from the runway end. This translates to about 300 feet of decent altitude for every mile flown. In other words, if an aircraft is three miles from the arrival end of the runway, its altitude will be approximately 900 ft.

Why do some planes fly lower than others?

Aircraft have different climb capabilities due to their varying sizes, payloads, engines and aerodynamic performances. For instance, a departing heavy jet aircraft will typically have a slower climb rate than that of a small light jet aircraft. On the other hand, aircraft arriving at IAH will generally have an approach altitude assigned by ATC many miles out before landing and, due to separation requirements, each aircraft will be assigned different altitudes as they simultaneously approach the airport side by side. Large aircraft will often appear lower and slower than smaller ones even though they are at the same altitude and air speed.

The FAA is solely responsible for the vectoring and sequencing of aircraft within Houston's airspace and on the ground within each airport. The primary responsibilities of ATC are to ensure the safe and efficient operation of aircraft.

No. Although the FAA and the Houston Airport System coordinate activities frequently, airspace control and management is the sole responsibility of the FAA. Any change in departure or arrival flight paths can only be approved and implemented by the FAA.

What are Stage 1, Stage 2 and Stage 3 aircraft?

This is an FAA system used to determine and certify the noise level of an aircraft based on weight, number of engines and, occasionally, its passenger capacity. Aircraft noise levels are certified as Stage 2, 3, or 4. Any aircraft that predates this system and was never tested and certified is classified as noise level Stage 1.

Stage 1 aircraft are the oldest and the noisiest, and are not permitted to operate in the United States if their certified weight level exceeds 75,000 pounds. The earliest Learjet aircraft are Stage 1.

Stage 4 noise level standards were recently recommended for future manufacture of new aircraft by the Committee on Aviation Environmental Protection of the International Civil Aviation Organization (ICAO). There is no requirement at the present time for a stage 3 phase-out. The Stage 4 standard insures that, over time, future aircraft types will be quieter.

Can the airport restrict a particular type of aircraft from flying over specific neighborhoods?

No. The airport cannot restrict access to various aircraft types nor  impose operational restrictions outside of federally-mandated requirements such as those enacted for the 2000 phase-out of stage 2 aircraft. Note that in 2000, the federal government completed the phase-out of all stage 2 aircraft weighing more than 75,000 pounds.

Newer aircraft currently being manufactured are much quieter than older aircraft. Many already meet stage 4 requirements recommended recently by the International Civil Aviation Organization (ICAO). For example, the new Boeing 777 is one-tenth quieter than the older Boeing 727-200, yet it can carry twice the number of passengers. 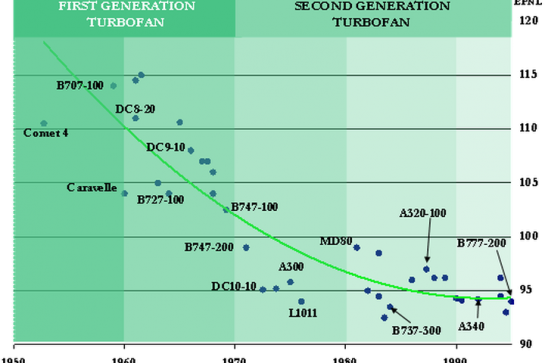 NASA, in collaboration with the aviation industry, is conducting promising research under the Quiet Aircraft Technology (QAT) program, which aims to reduce the perceived noise levels of future aircraft by 10dB within 10 years and by 20dB within 25 years. However, it is important to note that airline passenger aircraft have a typical life expectancy of about 25 years and that it takes many years for new technology to evolve from laboratory experimentation to production, and from production to meaningful market deployment.

Human response to single-event jet aircraft noise is best represented in terms of Effective Perceived Noise Level, expressed in units of EPNdB. This unit of perceived noise takes into account the actual sound energy received by a listener, the ear's response to that sound energy, the added annoyance of any pure tones or "screeches" in the noise, and the duration of the noise. In any discussion of aircraft noise abatement, a key consideration is the difference in noise level  that a listener is able to perceive and find meaningful, in terms of both the single event and the cumulative exposure. Few humans can detect differences between single events of aircraft noise of less than about 5 EPNdB. However, an increase of 10 EPNDS is usually perceived as a doubling in loudness.

The EPNL measurement is based on the following equation:

Why do aircraft sound louder at night than they do during the day?

Nighttime noise events are perceived to be louder because the ambient or background community noise is generally lower at night and  there is increased sensitivity to noise during normal sleeping hours. That is why the FAA adds a 10db penalty to aircraft operations conducted between the hours of 10:00 p.m. and 7:00 a.m.