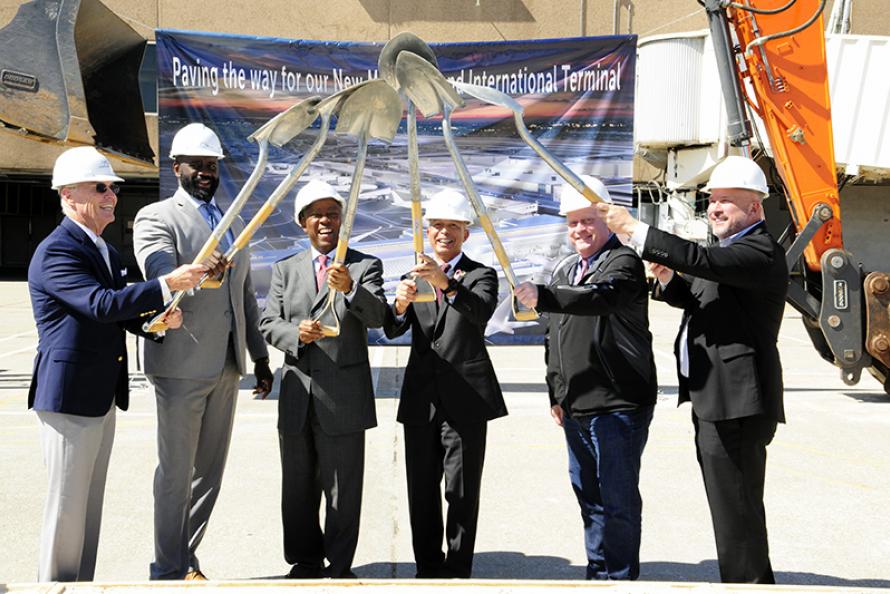 On Oct. 18, representatives from the City of Houston held a groundbreaking ceremony for the new Mickey Leland International Terminal (MLIT), starting with the demolition of Old Terminal C North.

“This is a signature moment as we continue our exciting IAH Terminal Redevelopment Program (ITRP) journey,” said Robert Barker, HAS Chief Infrastructure Officer. “Aviation Director Mario Diaz has called the ITRP perhaps ‘the most significant expansion project ever undertaken by the Houston Airport System.’ ITRP will be a catalyst for the HAS’s continued growth and development for many, many years to come. We’re moving toward our 5-star goals - to make the passenger experience at George Bush Intercontinental Airport second to none.”

Demolition of Old Terminal C North is now officially underway, and Barker estimates completion prior to Summer 2020. The demolition of the old facility will make room for six new gates to accommodate wide-body aircraft and facilitate the expansion and redevelopment of the MLIT, with expected completion by 2022.

Barker expounded that the team was in the initial stages of the preparatory work for demolition. “We are building a separation fence that will eventually form a boundary that separates the active airfield from the construction and demolition area,” he said. “It will be a SIDA separation to where effectively the project becomes landside. Concurrently, we are clearing all utilities.”

The demolition project will be virtually invisible to the traveling public – the plan is to safely demolish the building without interfering with ongoing operations within the adjoining buildings.

Houston remains the only city in the entirety of the Western Hemisphere with two 4-star rated airports, according to renowned aviation ratings organization Skytrax. Barker reiterated that ITRP is integral to those efforts to make a flying experience with Houston Airports the best in the world. The development of additional international facilities is needed to support continued unprecedented growth in international traffic at the airport. Nearly 44 million passengers traveled through the airport in 2018, including almost 11 million international passengers. 2019 is on pace for even more record-setting numbers.

The ITRP includes refurbishing the existing Mickey Leland International Terminal (MLIT) and demolition of the Terminal D/E parking garage to create an international terminal processor between Terminals D and E, where all the international ticketing counters, security checkpoint lanes and baggage claims will be consolidated. The completed ITRP will include two concourses — one each in the current terminals — where passengers will board their planes, dine or use facilities such as airport lounges.

The ITRP goes far in facilitating the achievement and sustainability of the HAS mission and vision. Its mission – connecting the world to Houston, and its vision – further establishing the city as a 5-star global air service gateway where the magic of flight is celebrated.

“The teams that we have assembled are working hard with regard to achieving these goals,” Barker said. “These efforts will serve to accommodate the long-term travel demands of a public that deserves our very best!”